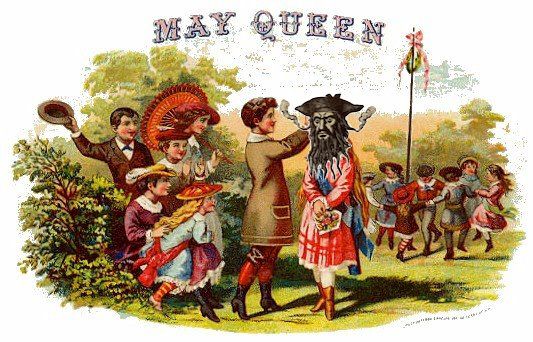 Day 672, May 1, Bay of Beltane, Territory of Tennessee. Hooray hooray, the First of May! The ship is festooned in Dionysian glory. The crew has turned the mainmast into a maypole and have fashioned ribbons from the sails and are dancing around it with seaweed in their hair singing “Pirates of the World Unite” and celebrating implementation of the 8-hour watch. Thorneycroft has been chiseling away at the figurehead, transforming Neptune to Aphrodite, a change cheered by all. Freebooters Local 615 has pushed through some long needed reforms: the cabin boy and all the other powder monkeys have been relieved of their duties and are off to school, we’ve instituted a day of rest every week for the entire crew (apart from the musicians), and we’ve raised the payment for loss of limb to 800 pieces of eight, with universal health care for the entire crew.
After a dry spell lasting longer than any captain should endure, I’m charting out voyages for the summer, and the future looks bright. We’re heading to lakes that can only be described as great for Tall Ships events, and we hope to spot some freshwater whales in the waters of GitcheeGummee, Erie, and Michigan. We’re returning to Beaufort for their Pirate Invasion in August, The Minnesota State Fair and the Pilgrimage Festival in September, and some shows right here in Music City, including a concert at Nashville Shores Water Park on Percy Priest Lake followed by fireworks. (We may even cover Percy Priest’s biggest hit, “When a Man Loves a Woman”.) Sage and I also have quite a few performances for young buccaneers coming up. All of our dates have been hoisted at www.tommason.net . Now, what’s the rest of that rhyme “Hooray Hooray…”?