Day one. I arrived on the island of St Thomas in the Lesser Antilles with a new crew. I have not breathed a word to them of my past misadventures, or the crew who so ruthlessly marooned me here last year, leaving me to subsist on whatever coconuts and feral mongooses I was able to catch before being rescued by a blues band from Bismarck who were sailing by. At this juncture it would seem I have no cause for suspicion. The quartermaster is a Czech named Pulkrabek who speaks not a word of English but is able to sing in his soon to be adopted tongue; the bosun is an Italian named Kowalski: her looks betray her skills on the violin, leading me to believe that she is not in her mid twenties as she appears and claims, but is actually in possession of the knowledge of the whereabouts of the fountain of youth, which would come in handy right now; (I mistook said fountain for a Pissoir some years ago.); the gunner is a Scottish calligrapher who was chosen for the voyage strictly by virtue of his name: Thorneycroft. We've secured a vessel and purchased provisions at a local sutler named kmart and are seeking out additional crew at Magen's Bay for Wednesday night's raid on Latitude 18 near the village of Red Hook. We will undoubtedly splice the main brace in honor of young Thorneycroft's birthday and reconnect with the dread brethren pirates of Red Hook, chief among them Barefoot Davis and Captain Rick. 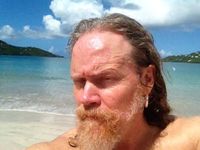 Day two. After spending the night in a swamp of mangroves first mate Pulkrabek and I have secured passage in a vessel to St. John captained by master Senterfitt. Tonight we return to Tickles at the Crown Bay Marina on St Thomas. If my memory serves me well (it usually gets the order wrong) Tickles is named after St Thomas' ruthless executioner Bartholomew Tickles. (I'll try to verify that.) Tickles sits at the ferry dock for the Water Island ferry which carries dozens of residents and visitors to Water Island daily, across the peculiar liquid the island is named for.

Day three. After a most successful engagement at Tickles Dockside Bar we scoured the island of St Thomas seeking lodging in the dead of night. We were told to look for a makeshift tavern at a dock nestled in a mangrove swamp where a benevolent barkeep named Nancy would meet us to provide us with a room in her home for the night. Within an hour of shutting our eyes a storm started, a topical symphony of rain and wind, and made me grateful to be sheltered here among the mangroves.

Waking up the next morning on yet another strange plank to the singing and cooing of the birds who dwell amongst the mangroves, I find myself on the anniversary of my birth, another year passed, filled with gratitude to the crew who have without complaint gone on the account with me, foregoing the luxuries of home for unpredictable levels of comfort (and often discomfort) and questionable outcomes, joyfully embracing lives of mysterious adventure, and I feel grateful to the crews who came on earlier raids, without whose pillaging skills I would never have returned to these waters. (It is in this light that I came to realize that what I thought had been an act of marooning last year by a mutinous crew was actually the result of a sort of nautical sleepwalking on my part.)

Today we leave St Thomas for the island of St. John, where we will with luck celebrate the birthdays of myself and Master Thorneycroft by seeking out a feast of raw fish. Should we be unsuccessful in our search, we will placate our appetites by donning underwater swimming glasses and staring at fishes that are still alive. This evening we will play a quieter set (sensitive pirates!) at the Inn at Tamarind Court, the villa where we'll be lodged for the night.